Present the criterias to other stakeholders like association of organic traders and further discuss these issues with them.

Raise awareness of the  European Commission on supply chains becoming more and more complex and the necessity to integrate this approach as well. 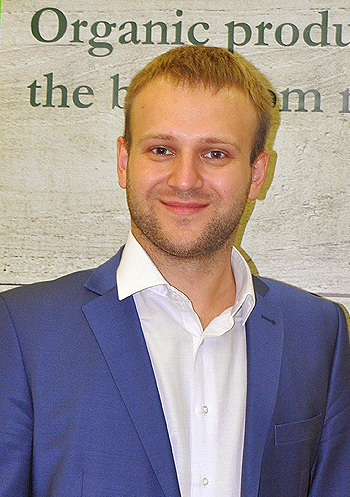 The TF HRSC is chaired by Sergiy Galashevskyy.

Sergiy Galashevskyy has been involved in the organic sector of Ukraine for more than 8 years. He started working in 2007 for the certification body Organic Standard. From inspector, he became head of inspection department and holds since the end of 2008 the position of General Manager. Under Sergiy’s management Organic Standard became one of the leading organic certification bodies in Ukraine. Sergiy was born in 1983. He graduated from the Bila Tserkva State Agrarian University (Agronomy Faculty) in 2006 and in the same year he also studied organic agriculture in Great Britain (Writtle college, University of Essex). In 2014 he finished his MBA education with specific topic of diploma work “Marketing strategies of organic certification body”. Sergiy is an active player of the Ukrainian organic sector; he belongs to official working group 8.2 Organic Farming (http://minagro.gov.ua/themes/garland/pdf/8.2%20Basic%20material%20EN.pdf) and also takes part in the process of elaboration of the Ukrainian organic law. Further, Sergiy is one of coordinators of Ukrainian Pavilion at Biofach and the annual national organic conference in the Ukraine. Sergiy is constantly improving his knowledge in various areas of organic production (certification, market development, legislation, control body management), studying experience of such countries as Switzerland, Germany, Poland, the Netherlands, France, USA and implementing the acquired knowledge in order to develop organic sector in Ukraine.